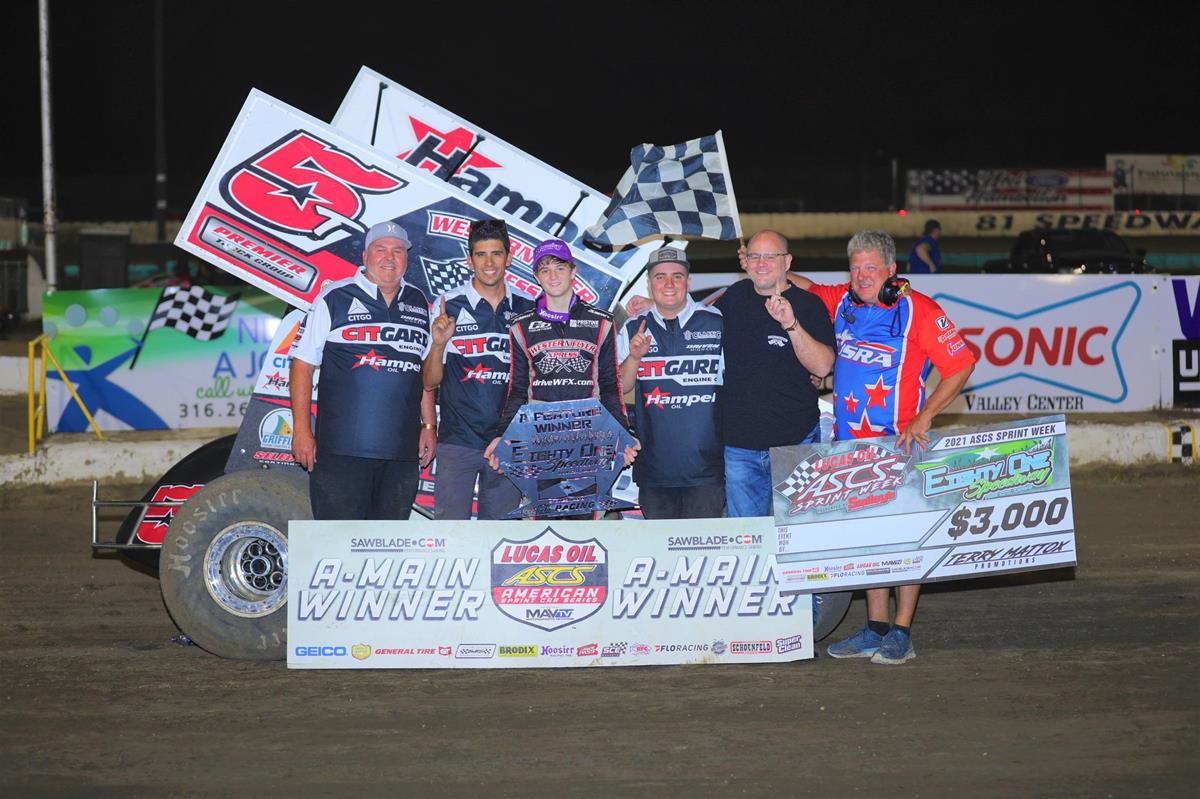 Bryan Hulbert – PARK CITY, Kan. (July 29, 2021) A force to be reckoned with; Ryan Timms was the fourth different driver to lead the way after charging through the field from 11th on Thursday night at 81-Speedway to claim his fourth career victory with the Lucas Oil American Sprint Car Series presented by the MAVTV Motorsports Network on night six of Lucas Oil ASCS Sprint Week presented by Smiley’s Racing Products.

Bringing the total to three wins on the week, the start of the SawBlade.com A-Feature saw the DriveWFX.com No. 5t shoot the bottom for eighth on the opening lap.

“We went out and walked the track during intermission, and the bottom was still pretty juiced up, so I figured I could probably use it on the start, and it worked, and just went from there,” commented Timms of the start.

Using restarts on Lap 13 and 15 following an open red, Ryan made it to third seven laps later. Chasing Colton Hardy and J.J. Hickle on a Lap 21 restart, Hickle lost grip on the restart, giving the No. 41 a shot at a slide job in turns one and two. Taking the point, Hardy was not alone as Timms slipped into second.

Going after the Highline Clothing Co. No. 41, the pair began sliding each other at both ends of the 81-Speedway. Advantage Timms as the field raced under the white flag; Hardy threw a bomb into the first and second turns. Making it to the cushion, Colton busted through the cushion and slammed the wall, sending him flipping. He was able to walk away and was credited with 17th.

Seeing what was coming, Timms stated, “I figured he was going to go for it and probably get the wall, but I didn’t think he’d flip. There wasn’t a whole lot up there to catch you, and when he bombed it off in there, I just turned down to get back under.”

Green, White, Checkered to the finish, Timms was careful to hit his marks for fear that Hickle was going to slide him. Able to get the jump he needed, Ryan pulled away by 1.119-seconds. J.J. Hickle held on for second, with Blake Hahn coming back to finish third after falling back as far as sixth. Battling with Hahn through the final laps, Matt Covington crossed fourth, with Brandon Anderson ending up fifth after leading the opening 10 laps.

Jeremy Campbell in sixth was followed by Dylan Westbrook, who rebounded from a trip to the work area on Lap 12. Ryan Bickett from 18th made it to eighth with Jason Martin, who had been battling inside the top five, slipping to ninth with a very damaged nose wing. Arizona’s Nick Parker made up the top ten.

Round 7 of Lucas Oil ASCS Sprint Week presented by Smiley’s Racing Products takes the Lucas Oil American Sprint Car Series presented by the MAVTV Motorsports Network to new territory as the newly built Tulsa Speedway hosts the series on Friday, July 30. Tickets are $20 for adults and free for Kids 10 and under. Tulsa Speedway is located at 3101 N Garnett Rd. in Tulsa, Okla. Information on the track is online at http://www.tulsaspeedway.com.

The 2021 season is the 30th year of competition for the Lucas Oil American Sprint Car Series presented by the MAVTV Motorsports Network.

SCE Gaskets Heat Races (All cars advance to the A-Feature)

Sawblade.com is the official SawBlade of the American Sprint Car Series and title sponsor of every National Tour A-Feature and Victory Lane. For more information, log onto https://www.sawblade.com and follow Social Media at @SawBladecom on Twitter, on Instagram at Sawblade.com_, and Facebook.

Associate sponsors for the Lucas Oil American Sprint Car Series presented the MAVTV Motorsports Network include Hoosier Racing Tire and Brodix. All Heat Races are brought to you by SCE Gaskets. All B-Features are presented by BMRS.