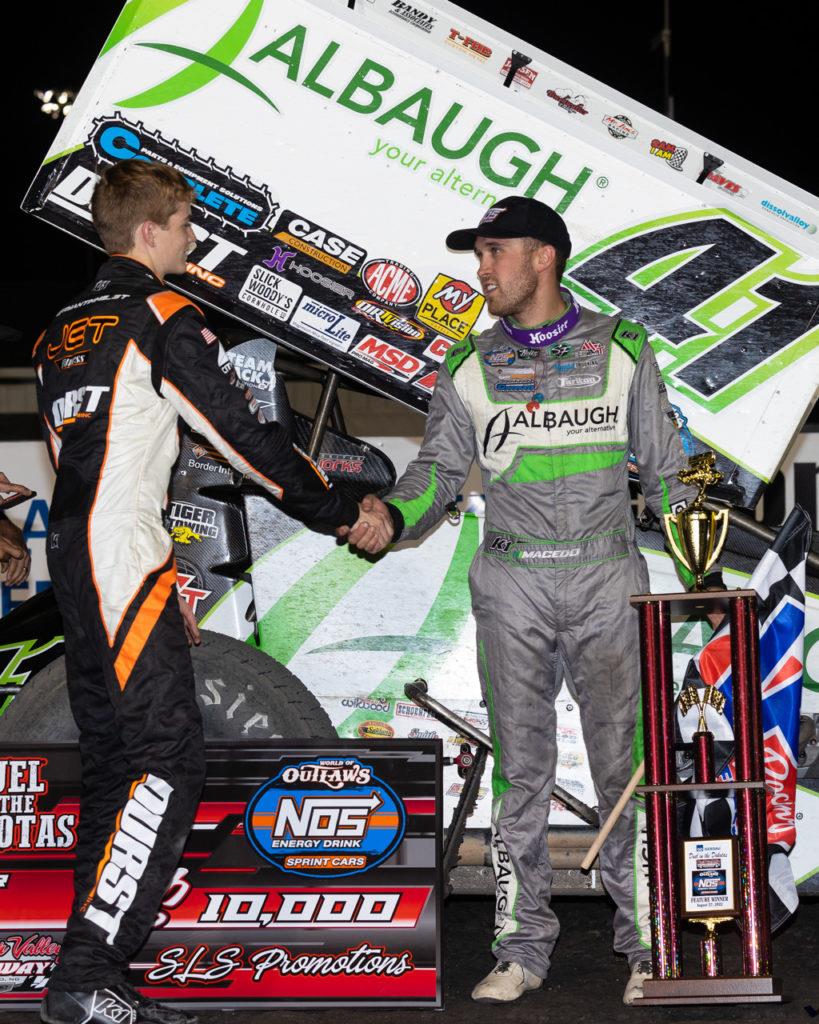 Ryan Timms made his much-anticipated debut with the World of Outlaws (WoO) NOS Energy Drink Sprint Cars over the weekend in North Dakota, and the talented Oklahoma racer didn’t disappoint. (Trent Gower image)

He kicked things off with a 17th-to-9th place performance on his 16th birthday Friday night at River Cities Speedway and then made history on Saturday night as the youngest driver to ever finish on the podium in a WoO event with a runner-up finish at Red River Valley Speedway aboard his CitGard Engine Oil / driveWFX.com No. 5T CITGO / Hampel Oil / Western Flyer Xpress / Mystik Lubricants / Eagle Chassis/ Rider Racing Engine Sprint Car.

“Man, it was awesome to finally get to race with the Outlaws. Friday night was great way to celebrate my 16th birthday at River Cities (Speedway), and we learned a lot and finished ninth. Saturday night at Red River Valley Speedway we had a great run and capitalized to cross the line in second. I think my team was even more excited than me for the finish.” Timms laughed. “I’m ready to hit the West Coast this weekend for three nights of Outlaws racing at Skagit Speedway.”

In a field of 35 entries, Timms edged his way into the feature with the fifth-and-final transfer spot in his heat race. Wheeling his way into the Top-10, Ryan passed eight cars in the 35-lap affair to register a ninth-place finish.

Getting the ball rolling early on Saturday afternoon at Red River Valley Speedway (West Fargo, N.D.), Ryan laid down the seventh-fastest lap in time trials before placing second in his heat race.

Scoring a fourth-place finish in the Dash, Timms locked into the fourth-starting position for the $10,000-to-win A-Main. After running third for the majority of the race, Ryan snuck past Brad Sweet following a late-race caution to secure a runner-up finish.

Timms followed Carson Macedo across the line with Sweet, David Gravel, and Robbie Price completing the Top-5 finishers. With his performance, Ryan became the youngest podium finisher in World of Outlaws history.
On Sunday afternoon at Huset’s Speedway (Brandon, S.D.), Timms’ fourth-to-first run in his heat race placed him on the fourth row for the main event. Moving forward five spots in the 25-lap affair, Ryan raced to a runner-up finish. He finished 0.693 seconds behind Corey Day with Ayrton Gennetten rounding out the podium.

Full results from the weekend are available at www.WorldOfOutlaws.com and www.HusetsSpeedway.com .