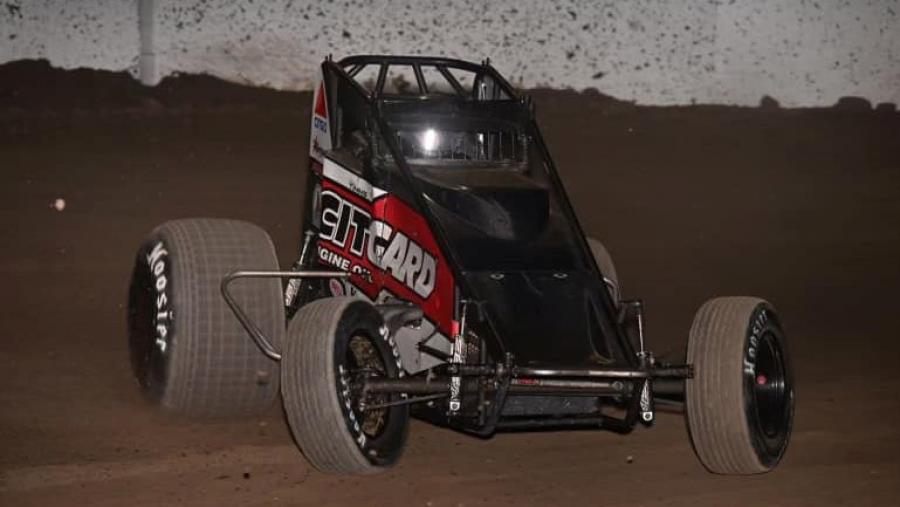 On Tuesday afternoon, Ryan Timms kicked off an action packed week with a visit to Merced Speedway (Merced, Cali.) to compete in his Citgard Engine Oils No. 5T 360 Sprinter and the Keith Kunz/Curb-Agajanian Motorsports No. 97K USAC Midget.

After starting the night off with heat wins in both divisions, Timms recorded a 10th-place finish in the Sprint Car feature and crossed the line in 13th in the 30-lap Midget prelim.

The following night, Ryan’s fourth-to-second showing in his heat placed him on the second row for the Sprint Car A-Main. Rebounding from the tail after running as high as fourth, Timms reeled in an 11th-place finish. In the NOS Energy Drink USAC Midget ranks, Ryan followed up a heat race victory with a 13th-place showing in the feature.

Back in action on Friday, Timms invaded Ventura Raceway (Ventura, Cali.) for the USAC West Coast Sprint Car Series-sanctioned Turkey Night Grand Prix. In a field of 49 cars, Ryan scored a pair of second-place finishes in his heat race and qualifier to lock into the prelim. Outrunning Logan Calderwood, Timms' 15-lap victory placed him on the pole for Saturday's feature.

Leading flag-to-flag in the 30-lap affair on Saturday evening, Ryan rolled to his 13th win of the season, which came ahead of Logan Calderwood, Mitchell Moles, Matt Mitchell, and Chase Johnson

For the NOS Energy Drink USAC Midget event at the 1/5-mile oval, Ryan secured his spot into the A-Main with a consolation victory after finishing sixth in his heat. Starting in 23rd, Timms passed nine cars in the 98-lapper to register a 14th-place finish.

Full results from the event are available at www.USACRacing.com.